CANDIDATES AND THE VOTE JOKE

If God had wanted us to vote, he would have given us candidates.
~ Jay Leno 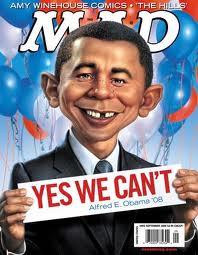 Wasn't it exciting when Obama won--our first negro (half-negro) (half African-American) (half black) (whatever...I wish they would make up their minds) president?!!

Did you ever imagine he would turn out so Republican?  Do you think he'll run again for office?  Do you think he would win?  (Well, against Bachman and Palin, yeah, but I mean against other more capable candidates?)

Do you ever get the feeling that Bachman and Palin are out there as diversions to the real threats?  (You don't really take them seriously, do you?  Please say no...)

Oh, what's the difference anyway?  Democrat, Republican; these days there aren't many differences between the two parties anyway.  They both answer to a higher power--and it is not GOD.

Sometimes I think both parties are just out for the same thing:  to fill their pockets; they just use different methods.

To me the Democratic platform sounds so much better, makes more sense, sounds more humane, than the Republicans.  Ultimately, however, they are ALL out for themselves and how much they can steal from us.  I'm beginning to think the Republicans are just more honest about it.  What do you think?
POSTED BY: www.philosophymindart.blogspot.com PSACHNO at 4:08 AM
Email ThisBlogThis!Share to TwitterShare to FacebookShare to Pinterest

"Life is the art of making sufficient conclusions from insufficient premises." ~ Samuel Butler

I'm a boomer who has traveled extensively and lived abroad for many years.

Currently, I am an unemployed counselor; but my mind continues to burn with wonder about why people do and believe as they do--and how we, the peoples of Earth, arrived at this critical moment in history.

So far, this blog records a truth-seeking journey, an effort to make more sense of life and tap into some possible solutions for our predicament. Returning from abroad over 10 yrs ago and very out of touch with current perspectives and information on all these subjects, my goal is to investigate my many burning questions and to share some of my perspectives.

I enjoy learning, communicating and civilized debate. My communication style is direct as I strive to be concise. Yet, I usually try to have fun along the way!

(Some posts are written in an academic style.)

Please note: This blog contains exactly the same articles as one of my other blogs, Political Psachno.

There was a time when I decided to separate religious and political posts from other subjects to avoid offending family members. However, I found the process difficult and limiting. Because these disciplines overlap so generously, compartmentalizing became impossible for me. I guess I'm a dot-connector after all. As for my family, I sincerely hope they will get over it.